Call Us
Written by Erik J. Olson. Posted in Advertising.

The world is moving away from broadcast TV. No longer do people have the patience to wait for their show to come on at the appointed time.

Now they can watch video content, on-demand, 24/7 and on any device of their choosing. With that, TV advertising has rapidly declined as marketers realize there are many better ways to attract the attention of their target audience.

This article dives into how this happened and the future of TV. In order to understand the context of our current TV situation and what the future holds, it benefits us to briefly cover how TV got to where it’s at now.

The Golden Era of TV 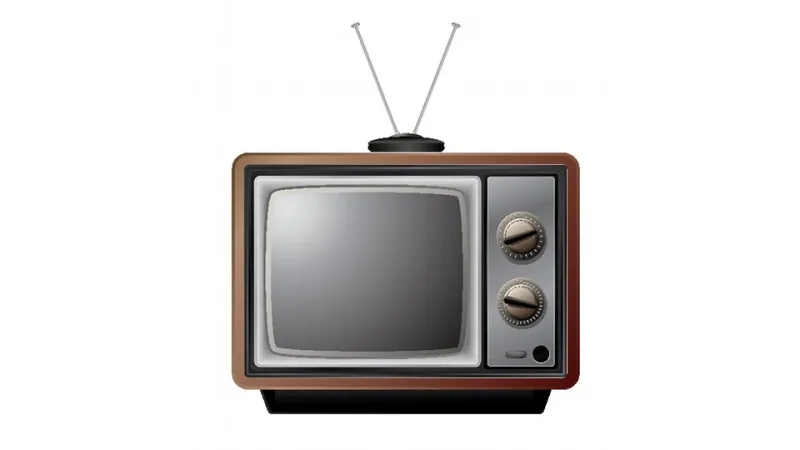 Image: Gizmodo
Do you remember this TV?  Did you actually use a TV like this?

If you’re like me, your job as a youngster was to hold onto the rabbit ears because if I let go, the station wouldn’t come in. My body was an extension of the antenna and it worked!

This is where TV started off in the 1950s. When TV went mainstream, it pretty much decimated the other media of the time.

In particular: the radio. Once we could see moving pictures, people understood the power of it and it was over for radio.

Cable TV came onto the scene very quickly in TV’s history. The first cable “networks” were created because individual homes in rural areas couldn’t get very good signal from the antenna in the big city. So they banded together and ran cable from the local “big” antenna and shared its signal between homes that could afford the cabling.

And so what started off in small-knit communities, as a patchwork of different cable networks grew over time to be the kinds of cable networks that we still use to this day.

Image: calcable.org
The red in the above chart shows broadcast and how it has grown over time. With the widespread adoption of broadcast TV by the public, other services were added. Between the years 2000 and 2010, we start to see the Internet infrastructure beginning to scale.

I was exposed to the cable modem around 1999. It was a huge deal. Before that you had dial-up and then all of a sudden we were using this cable infrastructure and we could get fast internet.

Image: Conversable Economist
TV viewership has continued to increase since the TV came out. No big surprise there. But looking at that same time scale where we had the infrastructure at scale, TV viewership has also grown.

TV viewership continues to grow and it’s getting higher than ever. We have more people that are watching TV now than ever before.

The Price of TV 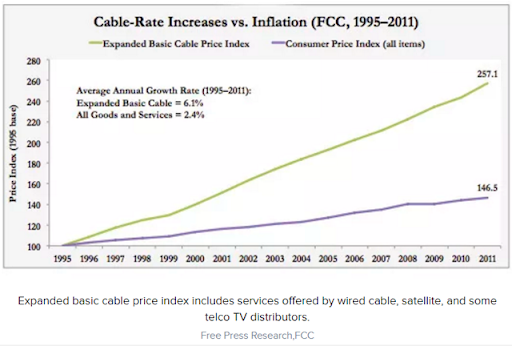 Now let’s look at how the price of broadcast TV has changed in terms of inflation.

If you look at that same timeframe where we had infrastructure scale, we started to see cable prices skyrocket without inflation being the cause.

When you think about cable TV, there are both pros and cons to it. You get a lot of channels so you have a lot of different options. But you’re paying for that privilege in dollars. You are also paying by having to watch interruptive commercial breaks. So you’re really double-paying – in dollars and your attention. That is the penalty of watching cable TV.

OTT – A better option for TV (and advertising) 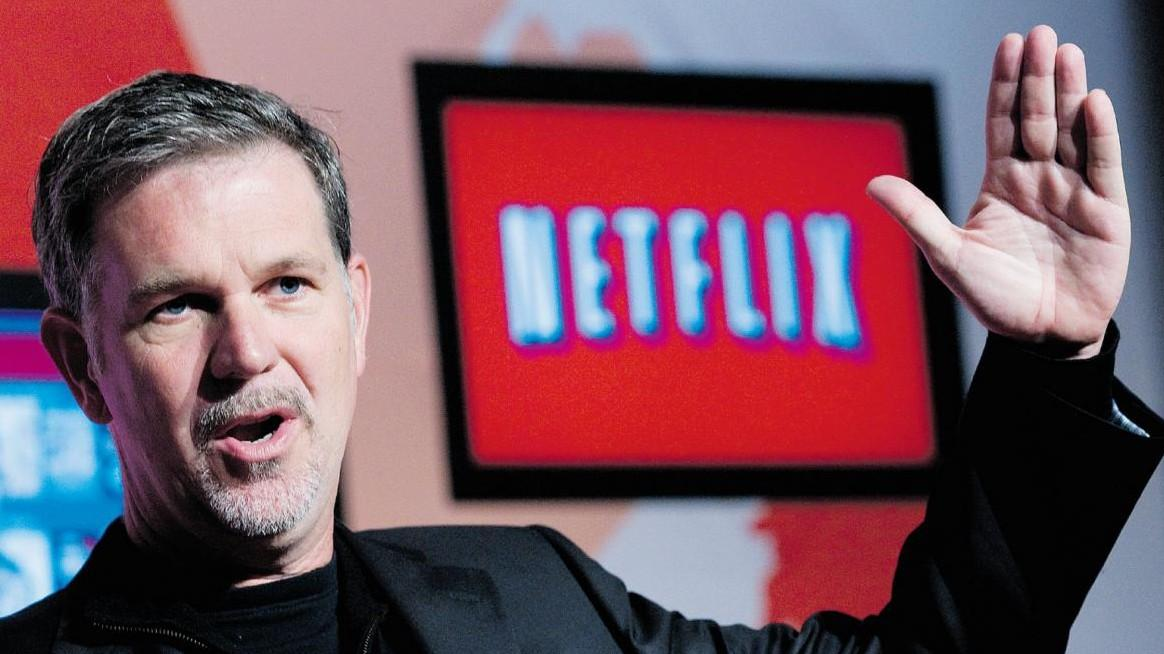 Image: Forbes
In 2007, Netflix went from shipping DVDs to streaming video. This was a big, big change. There were other systems out there that were streaming through what we now call Over The Top, or OTT, but Netflix was the one that really put it on the map.

In a nutshell, OTT is TV that you turn on through a device. You turn it on and you get content streaming across the Internet instead of through the airways or cable. 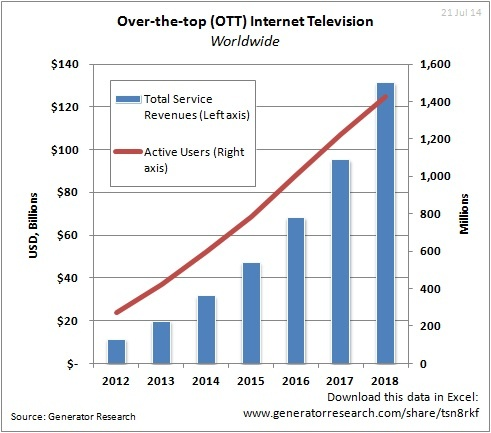 Starting in 2012, we experienced massive growth for OTT. Netflix led the charge as compared to other OTT providers.

Is OTT better than normal TV? 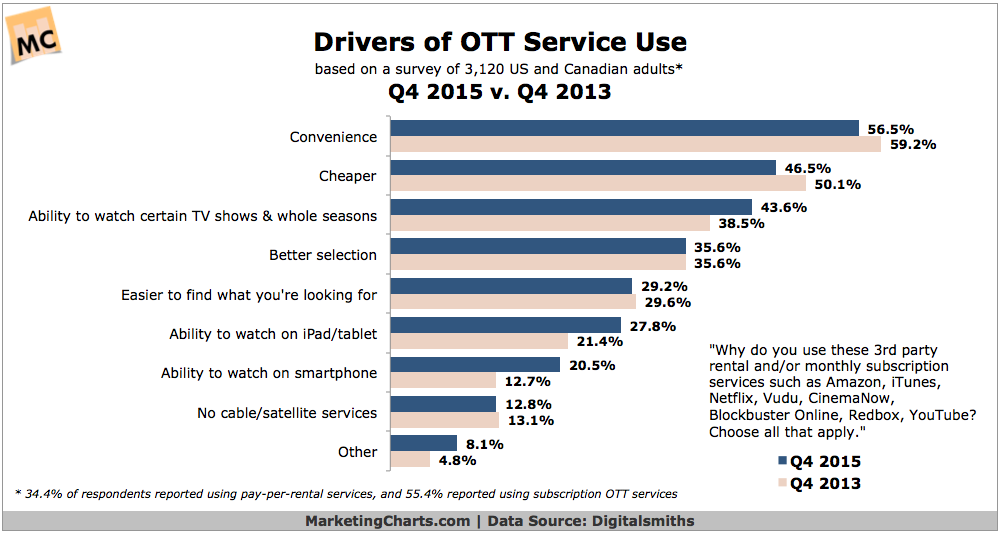 Image: WDC Times
With broadcast TV – also referred to as appointment TV – you must make arrangements to watch something on say Thursday night at 8 pm because that’s when it’s being broadcast. You only get one shot at watching it, so you’d better be ready! You have to set your personal schedule to coincide with the schedule of the broadcast.

With OTT, you watch whenever you want. It’s basically on-demand and it’s super convenient. And it’s cheaper. OTT allows people to watch TV on demand. It’s very convenient to simply hit a button and get the program that you want.

In my household, we cut the cable three years ago. We originally subscribed to Netflix only. Now we have Hulu as well. We still pay for cable internet, but not cable TV. Instead, we now subscribe to both Netflix and Hulu, two different OTT providers. We pay about $65/month for cable internet and $20 for Netflix and Hulu. With that, we get practically limitless high-speed connectivity to the internet and practically unlimited on-demand content.

Compare that to cable TV only, which is about the same price ($85/month) and we’d be without high-speed internet and stuck with broadcast TV and having to watch programs when someone else decides it’s time to watch. As a consumer, it’s an easy choice for my family – give me the internet and I’ll take care of picking which OTT I want to watch. 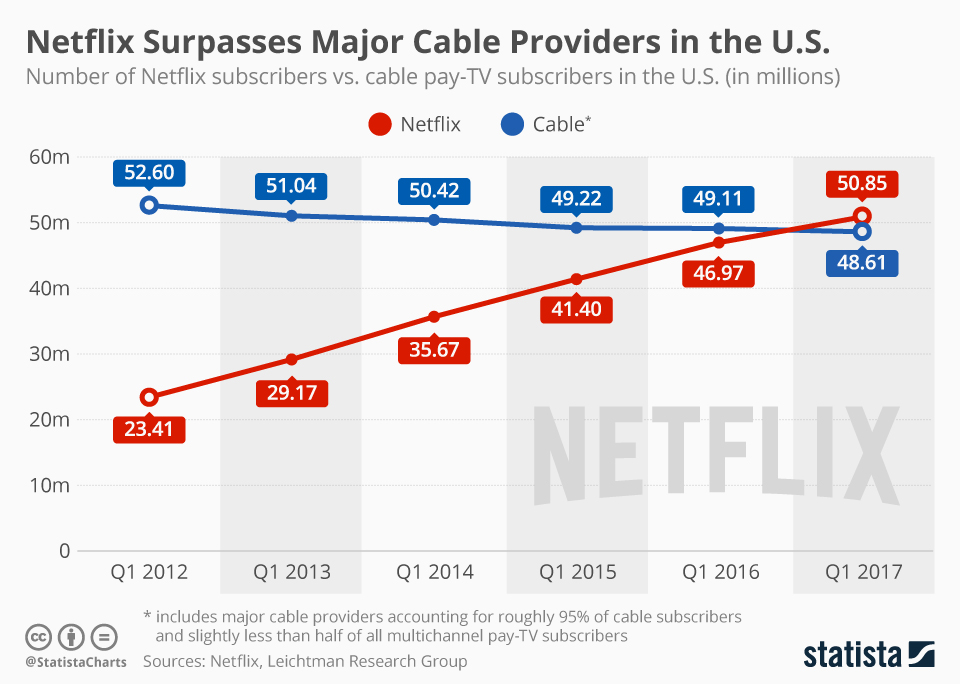 As a result of all the cost and convenience benefits of OTT, cable TV viewership has been steadily declining over time. It’s not shocking to see that Netflix viewership has rapidly increased during this same time period. As you can see, the number of people watching broadcast cable TV is now less than those watching Netflix. Cable TV is now in the minority as far as how people watch TV.

The younger demographics are more likely to try something like OTT because they didn’t grow up with cable or having to operate an antenna like I did when I was young. Many Millennials are referred to not as “cord cutters”, but as “cord nevers” because they never subscribed to cable.

What will happen over time is that the inflection point between OTT and cable TV is going to move to the right. As people get more and more familiar with things like Netflix, Hulu, and the other OTT providers out there, and as people age, the inflection point will move to the right. More and more people are going to be opting for OTT for their TV consumption versus going to traditional broadcast.

What about Ad Spend? 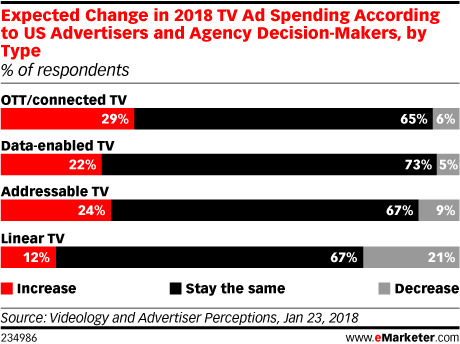 Now let’s see how these shifts in infrastructure at scale and OTT have affected how and where marketers spend their advertising budgets. As you can see from the above chart, budgets are shifting out of linear TV, also known as appointment TV or traditional broadcast TV, and into different TV delivery mechanisms. The biggest shift is the ad budget into OTT.

With OTT, content is streamed on a device such as a phone, computer, or a streaming box that has an IP Address. That IP is always for the media companies that provide the content to track the content that each household or device watches.

Its trackability is the key differentiator over broadcast. With broadcast TV, content is sent into the airwaves and cable system on a one-way visit. It’s not clear who receives it how, that is unless you pay big bucks to research companies like Nielsen to poll the public and figure it out.

What can you do with that data?

First, the commercials that are shown on that device could be relevant to people who like the Detroit Lions. How about an ad for an upcoming pay per view Lions game, an ad to buy a Lions jersey, or an ad for related football merchandise. Those ads would only be shown on that TV or to others who fit the demographic profile of that household.

It’s called 5G – the next generation of the cellular network which is rolling out in 2019 and 2020. If 5G lives up to its promises, then it’s going to be 10 to 100 times faster than the current 4G that you have in your pocket right now. And the cost will probably be around the same.

If you can get a hundred times the bandwidth for about the same price, and you can download a movie quickly, at some point people are going to start questioning why they’re paying for this modern-day “landline” called cable and cable internet.

Once people ask that question, the answer is pretty plain to see – you no longer will need a “landline” of any kind in your home. Your mobile line, with 5G internet, will be sufficient for all of your needs.

The cable companies have something to worry about here.

People are consuming more OTT than cable and broadcast TV and ad dollars are moving there as well. The cable companies are going to have serious competition when 5G rolls out.

5G will deteriorate the need for cable infrastructure, as well as the business model of cable in general.

For more information or help with your online advertising, call 757-333-3021 or use our contact page to speak with an ad specialist today.