Call Us
Written by Erik J. Olson. Posted in Entrepreneurship.

How to Overcome the Startup ‘Valley of Death’

At the last company I worked for as an employee, the HR Manager remarked on more than one occasion that the owner of the business was just like us but was a few spots ahead of us in line. He used the analogy of people waiting in line to get into the movies and that the owner of the company simply got in line before we did.

It was a simplistic view of the business world. His premise is that lines move and we’ll get to where the owner is in life if we just wait.

I now realize that his view reduced the owner’s hustle, grit, and determination down to mere luck and timing. As a naive younger version of myself, I assumed the business owner just got lucky and the HR Manager’s view reinforced that belief.

But now, knowing what I know about entrepreneurialism and auditing my time at that company with a more mature set of eyes, I recognize that the owners’ success was not due to luck. It was due to all the hard and smart work he put into the business.

Times of Growth Followed By Turbulence

The owner often showed us the company’s growth charts over time and how they had good times and bad times. I experienced both in the five years I worked there. There were boom times – frequent new contracts, new projects, and lots of activity. And there were slow times marred by rounds of layoffs. Their business adjusted, rightfully so, as it needed to. That’s not luck. And it’s not just timing. That’s strategy. That’s experience.

Like that company, Array Digital has gone through boom times as well as times when we’ve been forced to scale back.

Going into the 2017 holiday season, we had so much work and so many leads that we had strategic conversations about hiring rapidly and moving into a larger space to keep up with demand. A month later between Christmas and New Years, when it was evident that those leads had disappeared and our existing project work was wrapping up, we hunkered down and radically changed our business model.

As do the bad times.

It was a good revelation for us and the change in business models is one that has gotten us to sustainability today. But it was necessary for us to go through that bad time to get to this better time.

Like my previous employer, and like Array Digital, an entrepreneur’s path to success is not a straight line. If you were to chart progress over time, it’s just the opposite. There are ups and downs and zigs and zags all along the way. 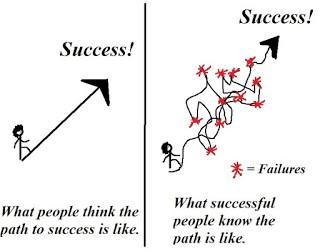 You will be challenged. Your “perfect plans” will be tested. You will fail along the way.

You must not only be financially prepared for these tests, but you must also harden your mindset as well to persevere the inevitable down times that come along with success. 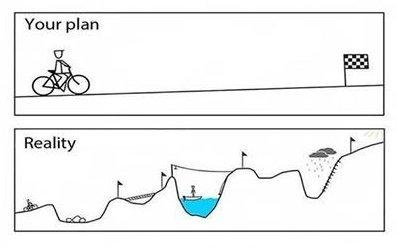 The above two images accurately portray the journey with its inevitable ups, downs, and failures along the way.

The book Scaling Up by Verne Harnish highlights just how hard it is for companies to grow.

Verne identifies several substantial revenue milestones in a company’s journey. Of the roughly 28 million companies in the US, only 4% make it to generating $1 million in revenue per year. That means that an astounding 96% either drop dead before hitting that milestone or they linger below that threshold year in and year out.

As revenue increases, the chances of reaching new milestones decreases substantially with only 17,000 reaching $50 million/year. That’s only 0.06% of companies. Clearly, the chances of making it big are low. Very low.

In Scaling Up, he portrays the journey in a somewhat similar fashion to the two images above. But there’s a twist: the Valley of Death. 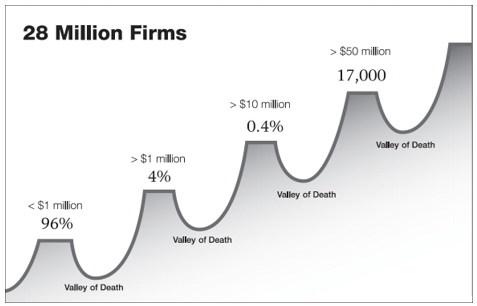 In between each significant milestone, there’s a danger zone – a Valley of Death – that each company must get through in order to reach the next milestone. If you’re not prepared for growth and you wade unknowingly into a Valley of Death, you may not emerge on the other side.

The Valley of Death exists because, as you grow your company to reach the next milestone, your processes and people will need to change in order to get you there. You’ve probably heard the old adage, “What got you here won’t get you to where you’re going.”

Change is required, and when you change, you put everything you’ve worked for at risk.

Remember that in business, there are good times and there are bad times. As you grow, your good times will likely turn into bad times. Your ups will switch to downs. This is the Valley of Death – when you put it all on the line to get to the next milestone, or you entrench and stay where you’re at.

Our Vision and During This Valley

Our vision is to create a $100 million national digital marketing powerhouse. So we are choosing to push through to the next milestone – to $10 million. That means, inevitably, we must cross our first Valley of Death. 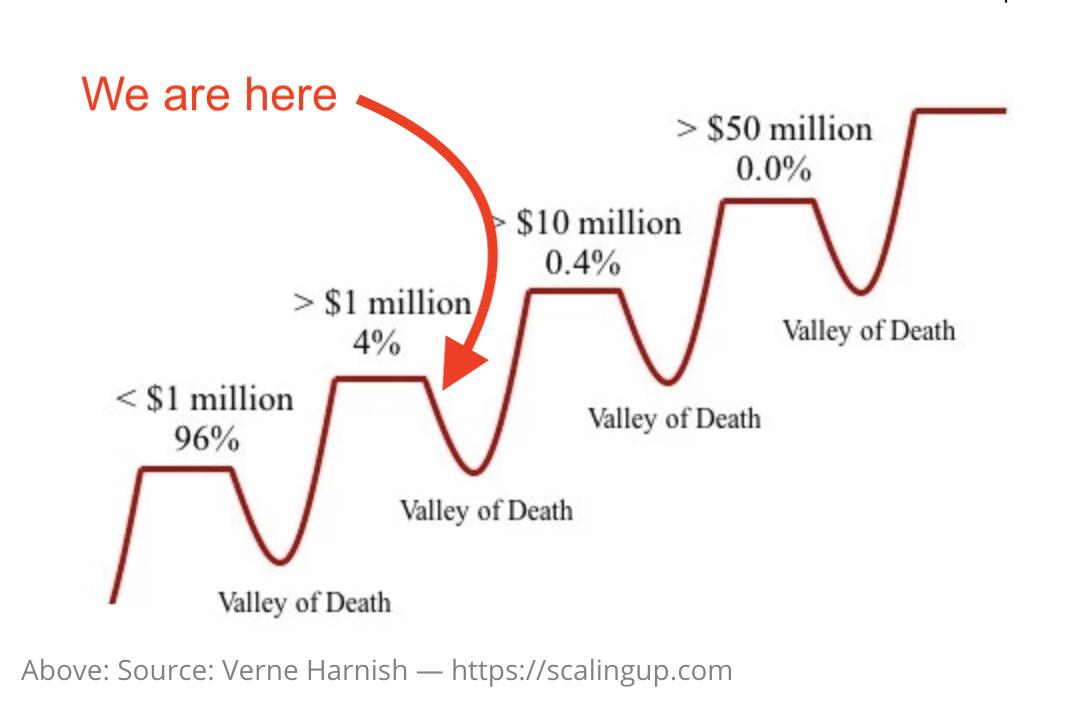 In the second quarter of 2019, it feels like we’re bouncing down the curve into the Valley of Death. We’re holding steady to revenue, but we’ve also lost as much business as we’ve gained. We’re changing our processes – in some cases drastically – as a result of the lessons we have learned from those lost clients. And the lessons that we’ve learned in the past have had to be remembered.

Change has come to us, but we’re powering through.

I don’t know yet if we’ve bottomed out on the curve downward, but I feel like we’ve hit an inflection point in many regards.

The lessons learned, as hard as they’ve been in some cases, are burned into our culture. Strict processes have been put in place to ensure that we never make some of those mistakes again. We’re building a sales force to build up that revenue and we’re learning plenty about the role of dedicated salespeople versus that of our operational staff.

Change is here and we’re coping with it.

If we learn our lessons, and we apply those learnings, we will see new revenue outpace lost revenue 2 to 1 next quarter. That’s the goal.

Final Thoughts on The Valley of Death

I will see you on the other side of the valley.